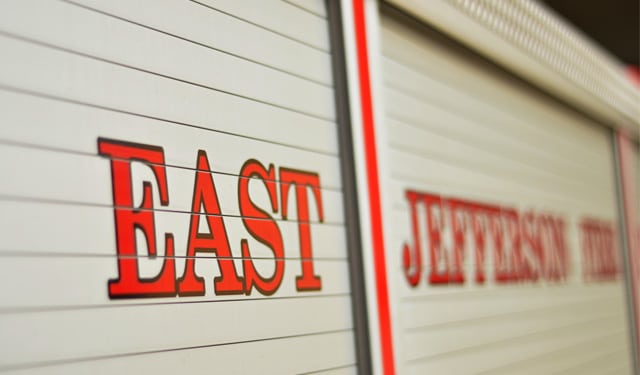 EJFR Board of Fire Commissioners

In 2019 the citizens of Fire District No. 1 voted to expand the Board of Fire Commissioners from three to five. Following that vote, Commissioner Districts were established and approved by the voters in November. Exact Commissioner District boundaries are still pending approval from the County Auditor – map will be provided when available.

The Jefferson County Fire Protection District No. 1 Board of Fire Commissioners meet the third Wednesday of every month. The meeting is held at East Jefferson Fire Rescue Station 1-1, 9193 Rhody Drive, Chimacum WA 98368 and typically starts at 7:00 p.m.

The Board of Fire Commissioners is governed by Chapter 52.14 of the Revised Code of Washington (RCW).

Commissioner Seabrook began his life-long commitment to the fire service mission in 1983 while living in Sedona, AZ. He completed his paramedic training at the same time he finished a degree in Earth Science from Northern Arizona University in 1987. Upon moving to the Pacific Northwest in 1988, he worked for an ambulance service in the Portland Metro area and started his professional fire service career in 1990. At Vancouver (WA) Fire Department he was an active EMS educator for years and helped implement many innovative programs. His Older Persons Are Important program formed the basis of his MPA degree from WSU in 1998, he also helped develop a nationally accredited Geriatric EMS training program. Promoted to Captain/Paramedic in 1997, he served on VFD’s busiest engine company. He retired in 2014 at the rank of Battalion Chief.

Soon after retirement he sailed down the Columbia River, eventually dropping anchor in 2015 at Port Townsend. He has since become involved in multiple organizations working on community resilience and food system security. He is a volunteer member of the Incident Management Team at Jefferson County’s Department of Emergency Management. He and his wife Karen are avid gardeners and reside in Chimacum.

He currently serves as volunteer Operations Section Chief for the Jefferson County Department of Emergency Management. While with the Umpqua National Forest Service, he became an Emergency Medical Technician (EMT) and EMT instructor. Commissioner Johnson helped start an ambulance service for the Days Creek Tiller areas and taught several EMT classes. When he moved to the Port Hadlock area in 1984 he volunteered for the Chimacum Fire District and became the first EMT instructor in Jefferson County. Commissioner Johnson is married and has two children and one grandchild. He and his wife Peggy live in Port Hadlock. They attend Port Townsend First Baptist Church, are avid square dancers and enjoy the other benefits of living on the Olympic Peninsula. In his spare time he enjoys fly fishing, salmon fishing, wood working, working out, reading, and volunteering.

Deborah Stinson moved to Jefferson County in 2003 after thirty years of management and technology experience in a variety of sectors. She was honored to receive the 2011 Jefferson County Heart of Service Award for the positive community impact of her volunteer work in emergency preparedness, facilitation of residents’ investment in small business, and through her leadership role in Local 20/20.  Deborah was elected in 2012 and 2016 to serve on Port Townsend City Council and was chosen twice by her peers to serve as Mayor. For the duration of that eight-year tenure, she served on the EJFR Oversight Board, the Jeffcom Administrative Board, the Department of Emergency Management’s Incident Management Team, in addition to other countywide and regional boards.

Geoffrey Masci
Commissioner Masci was appointed to the Board of Commissioners in January of 2020. He previously served on the City Council for the City of Port Townsend.

His career took him from Buffalo to Boston, then New York and finally the other Washington (D.C.). He worked in urban affairs, urban development, for a private real estate developer, and over a substantial period as a staff member for a member of the U.S. House of Representatives and for its Small Business Committee.

After a lengthy career, George relocated to Port Townsend in 2000 and became involved in civic affairs soon thereafter. He served for roughly a decade on the Fort Worden Advisory Committee, playing a role in the development of the management plan now in effect. He was appointed to the Port Townsend Planning Commission and became its chair in 2005, helping usher in the city’s award-winning Shoreline Master Program. In 2007 he was appointed to serve out the term of a city council member who resigned, and that November was elected to a full four year term, during which he was chosen by the council to serve as Deputy Mayor.

George says that one of his motivations for serving on the EJFR Board was the example provided by his stepson Anthony, who volunteered assisting first responders in both high school and college.

Permits are required for land clearing.